In honor of the Fourth of July holiday, I’m re-posting a short excerpt from my debut novel Lucid Dreaming. In the book, things start heating up right around July 4th at a family cookout. I hope you enjoy! 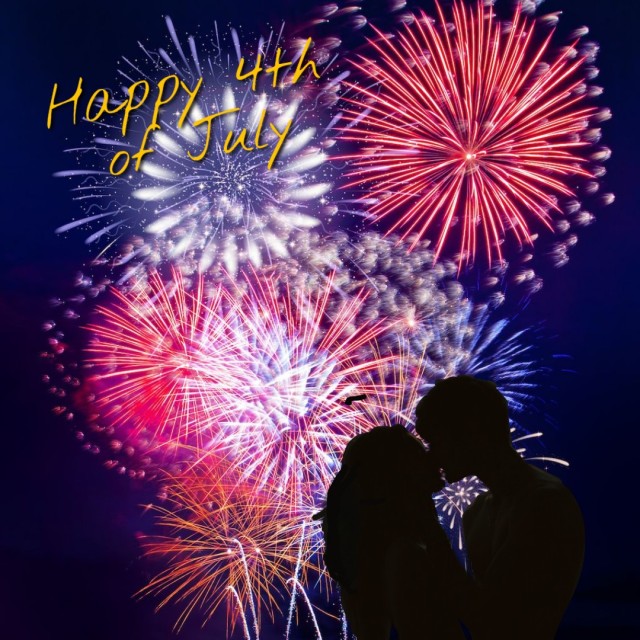 By the time the sun had officially tucked itself away for the night, the fire had reached its full potential. It was a beast of a thing, at least thirteen feet high. Turns out Harry had brought wooden pallets in the back of his truck which they’d stacked around the outside of their tree trunk tipi. It was ludicrous to think a group of fully grown men would get together every year and be unbelievably reckless like this, especially given the fact three of them were Ivy League professors. I smiled at the thought. Our primal instincts always got the better of us in the end.
I had decided to break away from the crowd and sit in the grass on the little hill, just a few feet from the underside of the deck. Here I sat watching the action quietly, sipping a beer. I hoped by placing myself in isolation I would be indirectly inviting Quinn to take a break and join me. My little plan worked all too perfectly.
Quinn spotted me soon after my retreat and caught me smiling. He was sweating from standing so close to the inferno and lifted his shirt to wipe perspiration from his forehead. I felt my stomach muscles tighten.
Releasing a small gasp of exhaustion, he sat down beside me in the grass and I handed him my beer without so much as making eye contact. He took a welcome swing and passed it back, wiping more sweat from his brow and sliding off his sneakers (which he’d put back on for safety purposes). I noted his toes wiggling in the grass.
“What are you smiling about?” he asked.
“Boys and their instinctual need to get dirty and play with dangerous things.”
Quinn, nimble as he was, had played an integral role in the building of the enormous tipi that was now slowly burning away. As a result, his dark clothing was covered with chips and slivers of dirty wood.
He leaned back, resting on his hands in the grass and coughed briefly from the smoke before finally catching his breath.
“This happens every year?” he asked.
“Ever since I was a little girl,” I answered, holding the bottle to my lips.
“Charles is certainly having a good time.”
“He doesn’t tell people because it sounds self-indulgent, but we all know this is by far his favorite day of the year. He can take off his jacket and tie. He can drink too much. He can gather all his favorite people in one place…”
“And he can build a colossal fire.”
“And that.”
I peeked over at Quinn. His vision was glued to the burning tower as if he was under its spell, the light from the flames reflecting in his half-lidded eyes. There was something explicitly childlike about them tonight. Perhaps it was just a trick of the flickering light, or maybe it was because, even if only for a few moments, he had gotten to be “one of the guys”. I was fairly certain Quinn didn’t get to experience things like this often. Or ever.
I joined him in watching the fire. The flames were mesmerizing, dancing in the darkness. Pops sent sparks drifting wildly in swirling paths and even from the hill we could feel the blazing heat on our skin. We sat quietly in this way for many minutes, neither of us uttering a word. Until–

BOOM!
The calm was over.
“That looks dangerous,” Quinn mused as red and blue sparks peppered the sky in a perfect circle formation.
Logan’s earlier claim that he would supervise the fireworks seemed null and void, as he had ended up getting just as drunk as the rest of them. I sort of knew he would, especially after the lukewarm comment about camping with his girlfriend. “I should probably go offer assistance and make sure no one loses a limb,” said Quinn popping up to his feet before I could protest. He snatched up his shoes and jogged over to the madness.
Janelle filled his vacancy before the air cleared.
“Oooooo,” she teased like a ten-year-old. “What did you talk about?”
“Not much.”
POP!
“Did the ‘incident’ come up?”
“No.”
“The more I watch, the more I see how totally into you he is!”
“Please don’t say things like that,” I entreated, nudging her. “You’re going to get me all worked up and if it’s not true I’m going to be upset.”
CRACK, CRACK-CRACK-CRACK-CRACK!
“Allie, have you forgotten something? I’m the one who disillusions you, not the other way around. If I say I think he’s into you, I mean it.”
“I– feel like I’m fifteen again.”
“Girl, it was fun bein’ fifteen. Embrace it.”
She had me there.
“Oh, Allie. Look at these stupid, stupid men.”
“Nine thirty and everyone still has all their arms and legs, though.”
“But probably some eyebrows are missin’.”
BANG! FFFTTTTTTT!
“Oh, definitely.”
Boy, they were pretty, the fireworks. They were going off from all directions now, not just from our backyard but from backyards all over town.
“I love this,” I said out loud to no one.