Oh, Charles Waverly… where do I begin? You were born of my imagination but you truly took on a life of your own. In a way, I love you like a second father. I wish you were real because I’d love to meet you in person.

When I first came up with Charles, my main character’s father, I knew he was going to be more than just a father to Alison, but also a friend and confidant. I also knew he would become the same for Quinn and that in order to earn Quinn’s trust and respect he had to be the best kind of person.

Charles is such an important character in the story. So important, in fact, Lucid Dreaming mentions him in the very first sentence:

“My very first class on my very first day of college was taught by my own father, Professor Charles Waverly.”

The story goes on to say:

“Other students might have taken great measures to avoid an occurrence such as this, but I went out of my way to ensure I was enrolled in this very class. My father was a man of great intellect. He was also wise and kind. He would treat me no differently than any other student, for better or for worse. It was one of the things I respected about him. One of the many, many things.”

He is smart as a whip, understanding and a big softie. He trusts Alison implicitly and in return, she has given him no reason not to trust her. They understand each other on a completely different level and they love and respect one another. The same statements can later be applied to Charles and Quinn, who bond almost instantly and grow into a quasi-father/son duo.

Wide Awake, which comes out July 23rd, pits Charles against a few unexpected challenges and puts him through one truly eye-opening experience. I am excited for fans of Lucid Dreaming (because omg, there actually are some) to continue Charles’ story as well as Alison and Quinn’s. And most of all, I hope readers love him as much as I do because he is truly precious and wonderful. 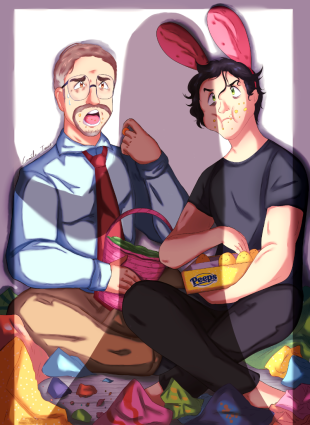 Quinn and Charles by Camila Inoa