When asking the people I know whether or not they read, many tell me “no” or “not very often”. That’s fine. Who am I to judge? I’m sure these people go on far more real life adventures than I do while I’m at home with my nose in a book. Those who say they do read frequently admit that they primarily do it via audiobooks. Audiobooks…. what a concept!

When I was fifteen I got my very first job at a independent bookstore. We sold both used and new books, but we also had one small wall of audiobooks (on cassette tape) that we would rent out on an index card system. Yep. The only people who rented them were soccer moms and old people whose eyes were too bad to read the actual book.

Seventeen years later, I find myself living in a world where people of all ages are head over heels for audiobooks, podcasts and the like. I have no problem with it, though I have a bit of a hard time joining in myself. For some reason listening to audiobooks make me feel like I’m cheating on
the book; I feel like I technically didn’t read it or earn the coveted status of saying I did. But that’s just me being weird. I love the idea of people with long commutes being able to “read” on the road. What a great way to make that otherwise wasted time more fun!

Now that I’m an author, and one without the funds to produce a physical book, I am creating an audiobook of my own for Lucid Dreaming. This costs me nothing (except lots and lots of time) because I am a freelance voice over actress with all the equipment already. I am three chapters into this endeavor and I’m quickly realizing what I’ve gotten myself into. 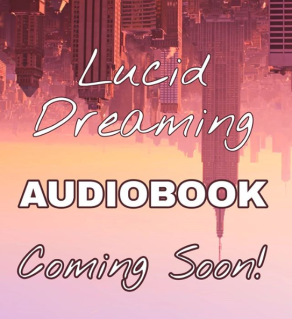 Most jobs I get are small– individual lines, or a page or two at most– then I typically send the copy off for someone else to edit. This is obviously not the case this time. It took hours just to do the first three chapters, and there’s so much left to do!

This hustle and grind is what reminds me that writing is truly a labor of love, because I won’t get rich from this. Or even slightly less poor. But I don’t care. I love Alison and Quinn and Charles and Logan and Janelle and all my characters.  I love their story. I don’t feel like I wrote it. I feel like I just read it and became a fangirl like I always do with books. I want to share this feeling with others, whether it be on an eReader or in their earbuds or through their car stereo. I want it bad enough to put in the work, so that’s what I’ll do!

So listen up, all you audiobookers out there. Lucid Dreaming is coming for you soon!